The programs offered are the same, expanded even, but what the neighbourhood used to know as HARRRP has been reconstituted as the Sherman Boys & Girls Club. 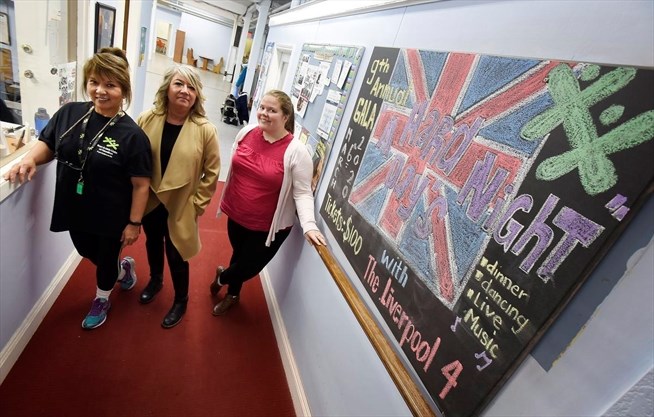 Liz Pascual, is program lead for 55 plus, Tamatha Tlalka, office administrator and Rebekah Clause, is supervisor, with the newly amalgamated HARRRP (Hamilton Association for Residential and Recreational Redevelopment Programs) and Sherman Boys and Girls Club. The program is having a large fundraising Beatle themed event March 6 to keep the program going. – John Rennison , The Hamilton Spectator

Consider this an introduction. Sherman neighbourhood, meet your old friend, for the first time.You might have noticed already the new name at the old St. Peter’s Anglican Church, that beautiful building (a church no more) 705 Main St. E. at St. Clair, where you used to see the HARRRP sign and try to remember what the letters stood for.

Hamilton Association for Residential and Recreational Redevelopment Programs. It was always a mouthful. Easier just to say HARRRP, especially if you used a pirate voice for the three r’s in the middle. But now you don’t have to. Because it’s not HARRRP anymore.

What HARRRP really stood for was community well-being. It offered great programs for free, like fitness classes, aerobics, ceramics, yoga, dance, martial arts and more, for residents, including new immigrants, to help them deal with poverty and other challenges but, beyond that, to the whole community as a way to meet and unwind. It still does but under a different name.

But enough suspense, already. So what’s it called now?

What? Boys and girls? What about the seniors and other adults. Oh, they’re all still there, more of them than ever, and that they’re being called boys and girls is just a measure of how organizations evolve. Especially those devoted to the interdependent well-being of communities, at every level.

So what started as a boys and girls club in Hamilton back in the 1940s has turned into an organization that reaches far across age groups and deep into the city’s infrastructure, providing housing, group homes and programs not only for kids but for adults with whom their lives are connected.

When the Boys & Girls Clubs of Hamilton (which has its roots in the Kiwanis Club of Hamilton East) was looking to establish a presence in the Sherman hub (it now has 34 locations in Hamilton and Burlington), the presence of HARRRP there presented an opportunity.

“There was a recognition that this could be a chance to be more sustainable, and we approached them to see if they were interested in joining up,” says Mila Minic, manager of community programs and services for the Boy & Girls Clubs of Hamilton.

“In the spirit of sustainability, access and resources, it was a natural connection,” says Rebekah Clause, program supervisor formerly for HARRRP and now for Sherman Boys & Girls Club. “Our mission and values and vision aligned and it was an opportunity to expand.”

What’s offered is the same as before, only more — and as I talk to Mila, Rebekah and Tamatha Tlalka, office administrator, they mention such a plentitude and range.

There are programs, offered by the club and/or in partnership, for newcomers, emphasizing things like civic literacy and language skills; tai chi; laughter yoga; square dancing; zumba; peer support for substance abuse and codependency and more, including the Tomorrow’s Voices barrier-free choir.

The Sherman club’s emphasis, despite the name, is still low-to-no-cost programs for adults plus 55, especially those on limited income, to help keep them active, socializing and un-isolated.

“We are trying more and more to introduce ourselves to the community,” says Tamatha.

During these COVID times, we practice online via Zoom.

In non-COVID times, we practice at the
Sherman Boys and Girls Club